Feeling Stuck? How to Create a Strategy to Move Forward

If you’ve ever felt “stuck,” you know what it’s like to have a certain mood that lingers over you like a dark cloud. Procrastinating on deadlines, confusion about what to do or where to begin, and other experiences of feeling stuck can leave you feeling anxious, apathetic, and out of options.

What causes a person to remain in a stuck state is not having a strategy for getting out. While it may seem that some people never get stuck, that’s not actually the case. Everyone gets stuck from time to time. Individuals that successfully avoid staying in stuck states simply have an effective strategy for getting themselves out of it as quickly as they got in.

A strategy is simply a plan, method, or series of maneuvers for obtaining a specific goal or result. You already have thousands of strategies embedded in your unconscious that dictate everyday behaviors. You have a strategy for everything you do, from brushing your teeth and driving a car to how you approach dating and resolve conflict.

Your unconscious strategies take action in a nano-second whenever you need them. Yet, in the case where you haven’t installed a strategy for how to do something, you get stuck. While some people’s strategy is to shut down, others are able to shift into a highly resourceful state and kick it into another gear.

Successful people have learned a successful strategy for getting themselves into a state where they see confusion as an opportunity for learning versus an impassable obstacle on the path. There is an opportunity here for you to learn new ways of doing things.

So, how do you get out of a stuck state? First, you need to figure out the state you are stuck in and decide how you want to feel instead. For example, you may want to get from procrastination to motivation, from confusion to resourcefulness, from apathy to inspiration, from feeling overwhelmed to being in control, or from having no options to totally going for it.

In other cases, your intermediate state might be positive or “move toward” (what you want). For example, a person who leans toward apathy might be pulled from that state if they feel curious, which might then lead them to excitement, which could then pull them all the way through to a state of being inspired.

Some examples of “move away from” states are:

“Move toward” states include:

However you design your strategy, an important point is that each intermediate state needs to have movement, whether it’s positive or negative. For example, “happy” is a positive state, but it doesn’t provoke action so it’s probably not an intermediate state that will get you moving. Frustration is a negative state that can inspire movement because as soon as you feel frustration, you want to get away from it. The most important thing to keep in mind about the intermediate states is simply that each state needs to be sufficiently intense enough to move you from the last state on to the next one.
For your chain of states to be effective, each step also needs to be self-initiated, meaning you shouldn’t rely on someone else to move you from one state to the next. It’s a new way of doing things that only you can create and initiate, which takes both creativity and application.

Once you have figured out your new strategy, it’s time to install it. Keep in mind that while it takes time and repetition to learn new behaviors, you can install a new strategy in a matter of minutes. As you do this, make sure that you are looking through your own eyes in whatever image you see in your mind. This is called being “associated,” and it enables you to realistically place yourself in the experience. To understand this exercise, use the example of moving from a state of apathy to feeling totally inspired.

This process is modeled after a technique from Neuro Linguistic Programming (NLP) called Chaining Anchors, which is a process used for moving a person from an undesired state to a desired state. The exercise above takes a slightly different approach by creating positive states using guided imagery through what cognitive psychology refers to as “dissociated state rehearsal.” This is what professional athletes do just prior to competing. They imagine themselves moving through their process in their mind as if they are actually doing it, and then they step onto the field, court, downhill slope or golf course and actually do it.
Your final step is to practice this new strategy in real time when you are feeling stuck in whatever state that tends to pull you down. Install your new strategy by using the metaphor from the children’s book The Little Engine That Could—moving from “I can’t do it” to “I think I can” to “I know I can” to “I did it.” With focused attention, an open mind and consistent practice, you will install your new strategy in no time at all. Alicia Keys on The Divine Feminine 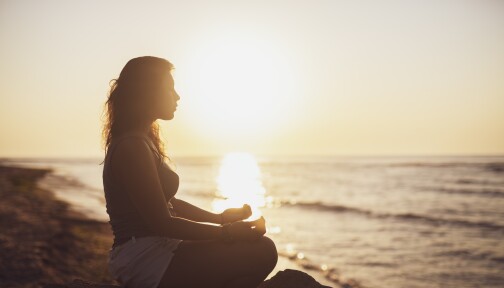 Time for a Body, Mind, and Spirit Cleanse

Healing with Our Children in the Pandemic and Beyond