Eating to Balance Your Chakras

Most people have heard of the charka system and understand it to be a collection of seven distinct energies that contribute to specific physical and emotional states. While there are numerous methods of modulating the energy flowing into the chakras, one very accessible means is through diet. Below are ways to integrate dietary considerations into your overall energy-balancing regimen and keep your chakras balanced.

The root chakra governs stability, survival, and security. It contains a predominance of Earth energy, which is the densest of the five elements. Of all the chakras, the root is the one most easily stabilized through food. Why? Food comes from the Earth, and as such, all foods contain a greater or lesser degree of Earth energy.

In that sense, simply eating regular meals with healthy, organic foods will churn the energy of the base chakra. Foods that contain a large quantity of Earth energy, and therefore ones that are best suited to increasing flow within the root chakra, include grains, nuts, legumes, root vegetables, and meats. At times when you are feeling particularly ungrounded or weak, roasted root vegetables, baked chicken, or quinoa can act as a particularly grounding meal.

Since the Earth element creates structure, frequently eating Earth-heavy foods may result in an increase in body mass. Except during times of extreme transition, such as the death of a loved one, a major move, or recovery from an illness, Earth-heavy foods are best combined with other elemental food energies.

The second chakra governs emotions, senses, intimacy, and connection. It is governed by water energy, which is nourishing, soothing, fluid, flexible, and dynamic.

When you are looking to enliven sexual energy and passion in your life, integrate juicy, orange fruits such as mangos, oranges, apricots, nectarines, and persimmons. Their lightness and high-water content will provide a burst of energy to the second chakra.

In addition, moist foods with an abundance of seeds such as passion fruit and strawberries are good for activating this chakra. Heavier orange foods, such as pumpkin, butternut squash, carrots, and sweet potatoes will offer more sustained, creative energy that can help to ground and stabilize the sacral chakra.

So, if you want to make love, eat a platter of strawberries, peaches, and passion fruit but if you want to write a book or engage in some passion project, go with roasted butternut squash and pumpkin bread.

Our 21 Day Meditation Experience program, Renew Yourself: Mind, Body & Spirit with Deepak Chopra and international music icon, J Balvin is taking place now through August 30. Listen for free! You can also download our app onto your phone and meditate from anywhere.

The third charka houses the energy that contributes to will power, self-control, ambition, and personal transformation. When balanced, this chakra creates a sense of purpose and direction. The third chakra is governed by the fire element.

Since the third and first chakras influence one another, the particular combination of foods you select for third chakra activation will be closely tied to the stability of the root chakra. A good rule of thumb is this: if you find it hard to initiate your motivation, spice things up with pungent foods; if you feel insecure and need to activate your personal power, go with the sour and salty foods. Regardless of root chakra stability, hot ginger tea is an ideal accompaniment for this chakra.

Astringent and bitter foods are useful in initiating air energy. Astringent foods, a combination of air and earth elements, tend to have tannins that result in a drying sensation in the mouth. Green tea, red wine, pomegranate seeds, unripe bananas, and most beans are astringent in nature. Bitter foods, a fusion of air and ether, consist of all leafy greens, coffee, and dark chocolate. Fresh green juices, salads, and smoothies are ideal compliments to a heart-opening regimen.

The fifth chakra houses the energy of communication, integrity, honesty, self-expression, and openness. It allows you to speak your truth clearly and kindly. The fifth chakra is predominantly ruled by the ether element. Ether is light, formless, and insubstantial.

As the chakra energies become less form-based, the foods that balance them have more to do with the subtle energies of color than of form. Blue foods, such as blueberries, blackberries, blue corn, and borage are significant contributors to the fifth chakra.

In addition, one of the best ways to balance this chakra is to take one meal a day in silence so that you may chew your food thoroughly. It is difficult to talk and chew well, so eating without talking or other distractions, including reading, listening, watching, or otherwise diverting your attention, will exercise and strengthen the throat chakra.

The sixth chakra, often referred to as the third eye, is the seat of intuition. Its energy encourages extra sensory perceptions, gut feelings, and hunches to make their way into your awareness. The element associated with the sixth chakra is that of light.

The crown chakra is located at the crown of the head and connects you to formless being. This chakra is sometimes referred to as the thousand-petaled lotus as its energy radiates in a thousand different directions. Since all elements are from the realm of form, there is no form-based element associated with this chakra. Its association is with pure consciousness.

The best way to balance this chakra through diet is to simply stop eating. Fasting has long been a revered part of most spiritual traditions. Even modern science is advocating relatively short (24-36 hours) fasting windows. Pausing the flow of food detoxifies the body, flushes out toxins, boosts your energy, and clears the mind.

While each of the chakras will occasionally need extra attention, the best way to maintain balance is to tend to each of them every day. Eat a varied diet full of colors, textures, and taste qualities. Also carve out time not to eat each day, perhaps from 7 p.m. to 7 a.m. Drink nourishing teas, spend time in the sun, and breathe in the fresh air. Your body, mind, and chakras will be nourished. 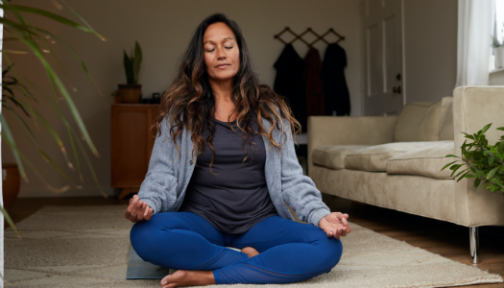 Balance the 6 Shadows of the Root Chakra Amid COVID-19 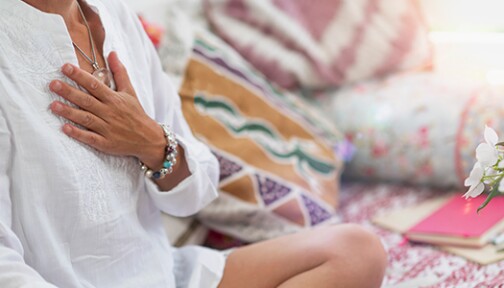 Keeping Your Chakras Balanced During COVID-19